Panerai has introduced a new movement in the calibre P.3000. This movement would be Panerai's 8th. in-house movement after the P.2002, P.2003, P.2004, P.2005, P.2006, P.9000 and P.999 movement. This new movement has the following technical specifications:
Hand-wound
Power Reserve 3 days
21 jewels
16 1/2 ligne diameter
5.3 mm thick
Two spring barrels
3 Hz Frequency Oscillation (21,600 A/h)
The P.3000 movement has 4 variations, starting with the basic P.3000 caliber featuring a 2 hand movement (hours and minutes), the P.3000-1 with small second at 9 0'clock position, P.3000-2 with small second and date (3 o'clock position) and finally P.3000-3 with a GMT complication on top of the small second and date.
With the introduction of the P.3000 movement, it would seem that Panerai may no longer use the Unitas 6497 movement. In comparison, both the Unitas and the P.3000 share the same size, i.e. 16 1/2 ligne, with the P.3000 thicker at 5.3 mm compared to the Unitas at 4.5 mm. The P.3000 movement has 4 more jewels as compared to the Unitas 6497.
Based on the information given by Panerai, the P.3000 movement will be used in the Historic Range of watches together with the P.999 and P.2002 movement. Additionally, this new beautiful movement will no longer be put through C.O.S.C..
The movement features a number of interesting technical design. The balance wheel is large, 13.2 mm and is of the variable inertia design. This design allows the rate to be regulated without the need to remove the assembly. Adjustment is made to the four adjusting screws placed externally round the ring. The movement also features an Incabloc anti-shock device and is free-sprung, removing the need for a regulating lever.
The movement is also fitted with a rapid adjustment device to facilitate adjustment of the hour, independent of the movement of the minute hands or the operations of the watch. This is done via a star wheel with 12 points and a spring clutch system.


The movement will be used inside Panerai watches in the USD 7,000 to 10,000 range of watches. I guess will have to wait for S.I.H.H. 2011 in January to see what pieces will be fitted with this new movement. It would be interesting to see if the 1950 case design makes it into the Historic range. The good news is that the movement is already in production and watches fitted with this new movement will be available after the show. 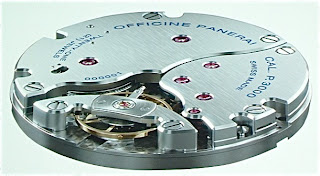 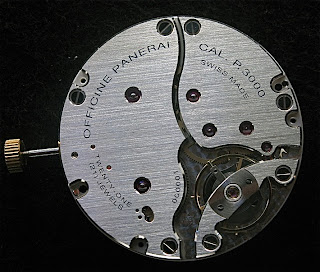 The bridges are brushed and beveled. 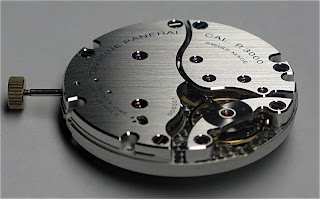 Photographs: Panerai
Posted by Ivan at 16:23