Yet another strap review. This time I will be reviewing my Zulu straps that I got off the Internet. I got two 3-ring Zulu strap with the intention of putting them on either my Seiko divers or the Longines Legend Diver. However, at the moment the straps are still in storage. I did put them on the Seikos for this review.
Firstly, I did not know the difference between NATO straps and Zulu straps. I did some research and this is what I found. NATO straps are known as NATO straps because the straps the specifications detailed in MOD Defence Standard 66-47 (30th. March 2001). The NATO name was probably given because the straps has a NSN (NATO Stock Number).
The Zulu strap is an attempt to improve on the NATO strap. These straps are 'better' made with laser cut holes and ends with little or no heat sealing.
There are other ways to differentiate Zulu and NATO straps. Generally NATO straps comes with rectangular hardware and thinner strap material. The Zulus have thicker and rounded hardware and thicker strap material.
Anyway on with the review. The first strap is by Maratac. I believe this strap is from the Maratac 'S-Series' Zulu Striped Premium Series bands. However, from the pictures that I have seen of the bands (on Broadarrow.net), the ends are rounded. My band has a 'square' end. Perhaps the former owner did a modification. The band is a 22 mm Acu Grey Stripe Band. I initially thought it was Green stripe until I saw the Caustic Green Stripe model.

The band is well made and uses 1.5 mm thick black/ grey material. The edges are well finished and there are no fraying. The end is heat sealed. It is a very firm band. 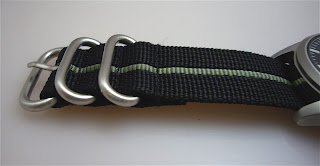 The hardware is brushed stainless steel (316L I believe). The buckle is sign 'MARATAC' on the underside. There are 2 rings for the band to loop through. The rings and buckle measures 2.5 mm in diameter. 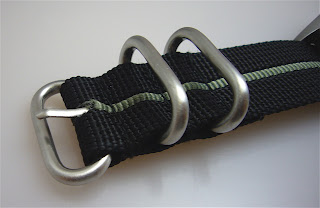 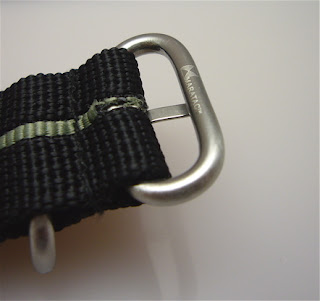 The stitching on the band is good and goes over edge. I like it. The thread used is black and it matches the overall design of the band. The holes are also well cut-out. I don't know if it is Laser cut, but there is minimal heat sealing around the holes. 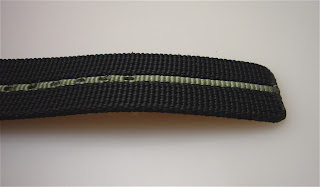 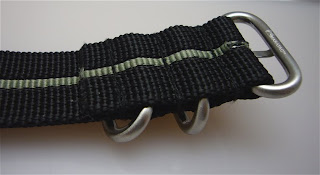 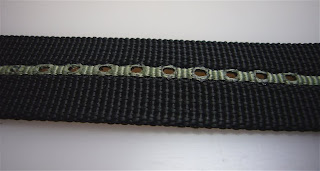 The next Zulu band is without a brand. I think it is a generic Olive/ Brown Zulu Ballistic Nylon band. This band also measures 22 mm wide. The end is rounded. I like this band as well. It is also very well made. I had a very good look at the hardware to make sure that it is not signed, in case it has worn out. It is unsigned.

The hardware on this band is what is called a low-lite hardware. The buckle and two rings are PVD black. If you ask me, it looks more like PVD gun metal. As with the Maratac band, the hardware have low magnetic properties. This makes these straps suitable for use on compasses. The hardware are as the Maratac, 2.5 mm in diameter. Thick and strong. 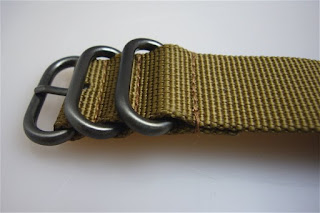 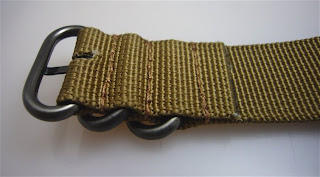 The band material is also 1.5 mm thick and it is well made. There are no edge fraying and the ends are heat sealed. The holes on this band seem better cut as compared to the Maratac. Again I am not sure if it is Laser cut. The stitching on the band is also good and it goes over the edges as well. 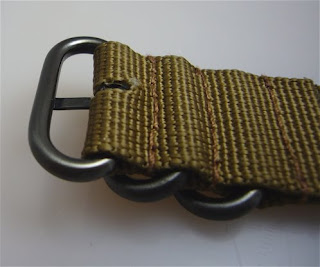 I like both the bands. They are well made and I find them more robust as compared to my NATO straps. I think they are more suited to be fitted on Diver type watches. I may end up using the brown band on the Longines after all. I have yet to use them on a long term basis but on a short (very) term basis, I do find the bands very comfortable. I like the bands and am sure I will find a use for them. As of now they are in storage.
Posted by Ivan at 20:57