Christopher Ward (of London) working with the RAF, will be issuing a watch to celebrate the 70th anniversary of the Battle of Britain. The watch, the C5 Battle of Britain watch is available for pre-order for the 9th of July.
The watch is based on the watch, reference 6B/ 159, issued to the RAF in the 40s. The watch will carry The King's Crown and laurel wreathed RAF Crest (of the period) on the dial. The hour index will also be similar to the watches of the period. The hands is also designed to look like the propeller blades of the Spitfire.
The watch is a limited edition run of only 1,940 pieces. The watch will be powered by the robust and popular ETA2824-2 movement. The cool aspect of the watch is that the owner's handbook will look like the original 1940s aircraft pilot logbook. Additionally, Christopher Ward will donate 5% of the retail value of the watch to the RAF Benevolent Fund. How cool is that.
Basic Specifications:
Functions: hours, minutes, seconds and date (3 o'clock)
Case: stainless steel, 38 mm diameter, 10.8 mm thick, lug width 18 mm, screw down crown and case back
Crystal: sapphire with AR coating
Movement: ETA 2824-2 automatic movement
Water resistance: 5 ATM
For more information:
http://www.christopherward.co.uk/
The watch. 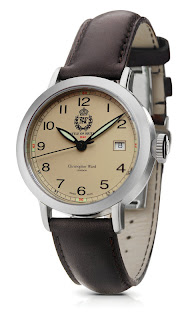 The case back. Note the very nice inscriptions. 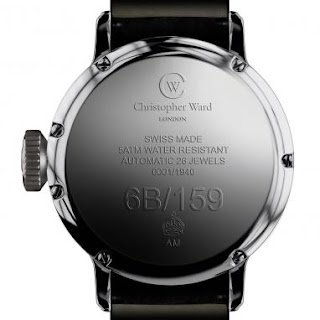 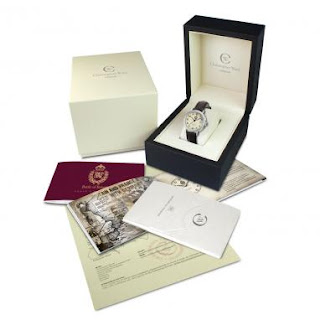