The PAM00380 is one of the watches announced by Panerai at the recent S.I.H.H. 2011. The Radiomir Black Seal watch is part of their Historic Collection. Some people consider this watch one of the least exciting releases by Panerai. I figure otherwise. I like the watch. It is nice to see the logo being used on the Radiomir.
The PAM00380 is similar to the current PAM00183, but there are several major differences between the watches. The most visible difference is in the dial. The PAM00380 does not have the sandwich dial like the PAM00183 but instead has a painted dial. It also sports the Panerai logo on the dial at the 6 o’clock position. I believe this is the first Radiomir to have the Panerai logo on the dial.
The other difference is the movement inside the watch. The PAM00380 is fitted with the Panerai OPII calibre, while the PAM00183 is powered by the Panerai OPXI calibre. Both movements are very similar, but with the following differences: The OPII does not have the swan's neck regulator, and lacks the higher quality finish of the OPXI. Because of these differences, the PAM00380 has been fitted with a solid case back.
Basic specifications:
Functions: hours, minutes and seconds (sub-dial at 9 o'clock)
Movement: Panerai OPII hand would chronometer (COSC) calibre
Case: 316L stainless steel, 45 mm diameter
Crystal: sapphire (1.9 mm thick)
Water resistant: 10 ATM
For more information:
PAM00380 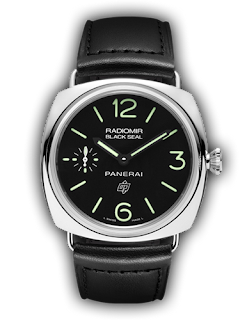 The solid case back. It comes with removable lugs. 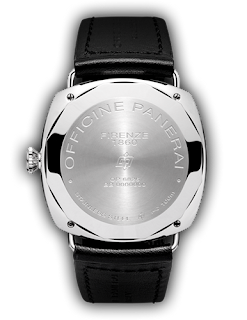 A closer view of the dial. I do like the dial. 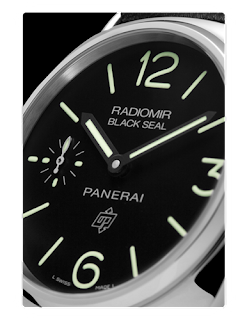 Photographs: Panerai
Posted by Ivan at 23:35