In my effort to better understand the horological world, I posted the following in a forum of which I am a member to see what are the members take on the subject.

"Apologies upfront as this is not a thread on watches with tourbillons, although we do not mind if you do post them for us to view and appreciate, but more of a discussion on tourbillons.

To make it simple, I have copied the definition of tourbillon from wikipedia:

In horology, a tourbillon (French: "whirlwind") is an addition to the mechanics of a watch escapement. Developed around 1795 by the French-Swiss watchmaker Abraham-Louis Breguet from an earlier idea by the English chronometer maker John Arnold, a tourbillon aims to counter the effects of gravity by mounting the escapement and balance wheel in a rotating cage, to negate the effect of gravity when the timepiece (thus the escapement) is stuck in a certain position.


Additionally, what are your view on the use of the tourbillon on modern wristwatches? It does show the movement manufacturer capabilities to manufacture a complicated regulator, but does it improve on the accuracy of the wrist watch?"

The response thus far is pretty interesting. So far, most agree that the addition of a tourbillon does not improve much the accuracy of wrist watch, even if it does, it is a pretty expensive option at that. I tend to agree. I can see the use of a tourbillon on pocket watches, but not in the modern wristwatch. The modern wristwatch is not and will not be 'stuck' in a certain position long enough for gravity to have an impact on the accuracy of the movement. Additionally, the movement in modern wristwatches are already pretty accurate.

While the tourbillon is nice to look at, what with its constantly rotating cage and all, more so if the tourbillon is a multi axis tourbillon, but I rather see automation like Van Cleef & Arpels's Pont des Amoureux (Lover's Bridge) where two figurines share a fleeting kiss... 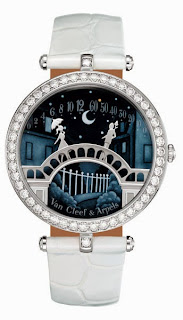 Or this, from Jaquet Droz.. 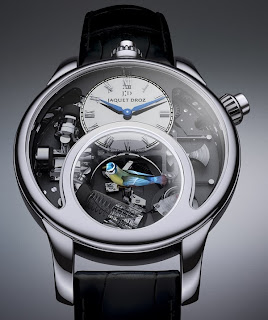 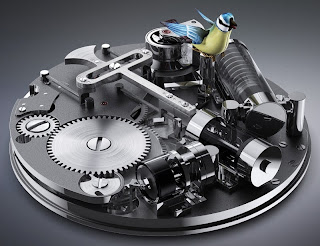 The video of The Charming Bird.