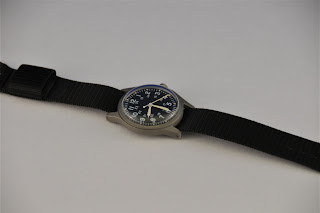 This watch is manufactured to the GG-W-113 specification (6/6/1967). Companies that produced watches under this specification for military issue includes Benrus, Waltham and Marathon. The GG-W-113 watches have been issued to the American Air Force (USAF) since the Vietnam war. 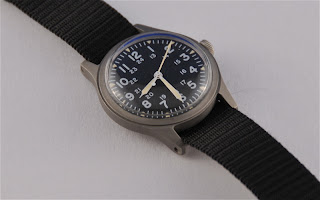 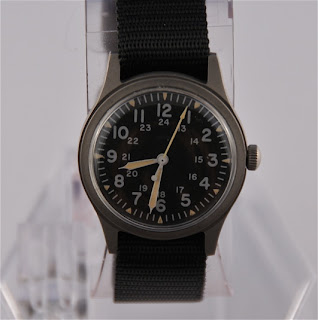 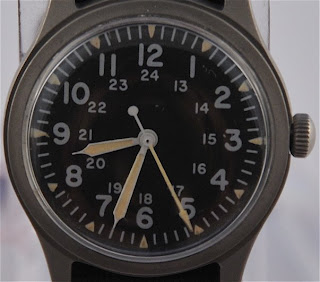 This is a simple watch as can be seen for the photographs. The dial is black. Although the dial has the 12 hour and 24 hour markers, the dial does not look busy. The hour index markers are luminous. The hands are also luminous and that includes the second hand. The lume on this watch have aged well and is even across the dial and hands. I just love the patina. 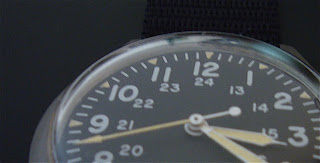 The watch is fitted with a hand winding Swiss made ETA 2750 hacking movement. The hacking movement allows for precise synchronization of the watch to a known source of time. According to what I have read, some movement will have the H.W. Co. (Hamilton Watch Co) cal 649 signature on the movement. And some are unsigned. 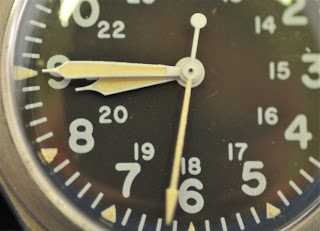 The watch was issued with a black nylon band. Some were issued with the olive drab band. Mine is fitted with a new Maratac black band. I guess the original band is long gone. 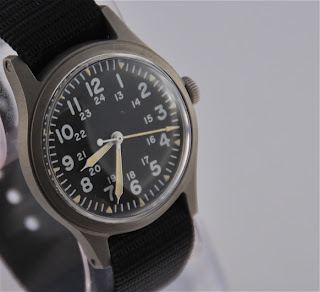 The watch is pretty thick, but this is attributed by the high crystal fitted. Images on the Internet shows both high and low crystal fitted on this watch. The low crystal is made by Stella and is the wedge ledge low dome crystal type. The high crystal is the Stella WRA style crystal (Other manufactures include GS? and Sternkreuz?). Also it is believed that some of these watches were issued with armored crystal. 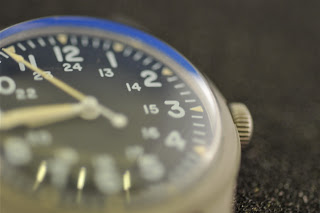 This watch comes in 2 case design, the one-piece case (earlier issue) and two-piece design (later issue). This watch being reviewed is the one-piece design version. The case is made of corrosion resistant steel (parkerized?). It is 34 mm in diameter and measures 41mm lug to lug. Servicing these watches is possible but best left to the professional as access to the movement on the one-piece design is via removal of the crystal. 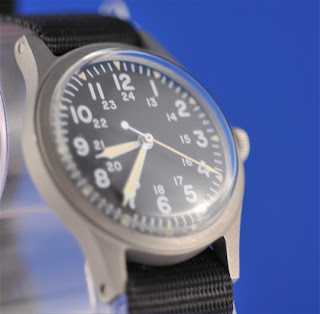 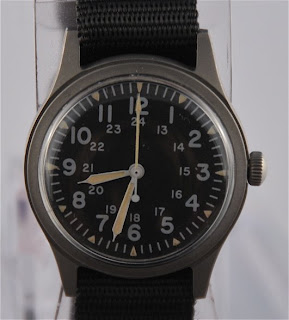 The watch comes with fixed lugs, hence the use of a one-piece band. 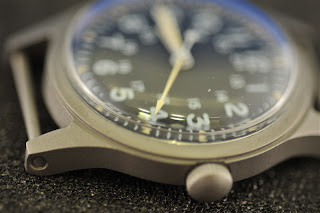 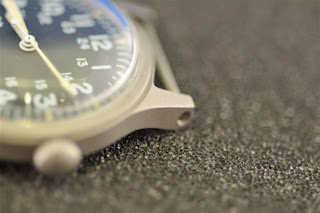 The crown is non screw down crown. It is 5 mm in diameter and is big compared to the case.The crown has 2 position, the first is for winding and the second for adjustment of the hands. The large crown is wonderful to use and pulling out the crown for adjustment is easy. The crown is unsigned. 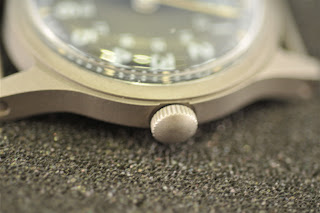 The military markings are on the case back. The markings:
WRIST WATCH
GG-W-113
FED STOCK NO 6645-00-066-4279
MFG PART NO 39886
CONT NO GS-OWS-51982
DATE JUNE 82
SERIAL NO 736736
US
The second line the is the model number.
The third line is the Federal Stock No. From the MIL-W-46374 Information site:
"This is known as the "FSN" (Federal Stock No.) on older watches or the "NSN" from 1975 until the present. This code begins with the four-digit FSC (Federal Supply Classification) code 6645 that designates "Time Measuring Instruments". Every watch issued since the 1950’s, as well as stop watches, clocks, timers, etc., carries this designation incorporated into its NSN.
The National Stock Number (NSN), has a two number "country code" following the FSC "6645" on the National Stock Number (NSN). So a newer (1975 and later) NSN would read, "6645-00-952-3767", but an older FSN for a similar watch would read, "6645-952-3767". This two-digit country code is formally known as the NATO code for the National Codification Bureau (NCB). All US issues have either a 00 or 01 country code in this spot. Examples of other country codes that might appear on military issue watches are: 21 for Canada, or, 99 for the UK.
The final set of seven numbers called the National Item Identification Number (NIIN), designates the specific item. This is similar to what is known as an SKU (Stock Keeping Unit) in the civilian retail world. The NIIN designates a particular item usually required to be made under a specific military specification (although not always) and adding specific requirements of its own. For example, the NIIN 066-4279 designates watches made under various specifications but limited to watches that hack and have a high quality movement with 15 jewels or more.
The NSN and FSN are important to collectors of issue watches because they provide more specific information about the quality of the watch in question than the mil spec alone."
The forth line is the Hamilton part number.
The fifth line is the contract award number. This is an order number for the purchase of the watch by the U.S. Department of Defense.
The sixth line the date of manufacture.
The seventh line is the watch serial number. I like my serial number.
The last line, US - United States. 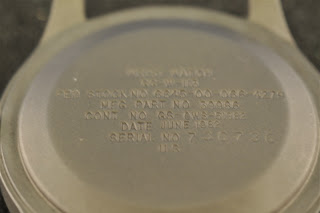 I like this watch. Although this watch is 34 mm, it does not wear small. It is light and very comfortable. The minimalist design is wonderful to look at and reading the time is easy. 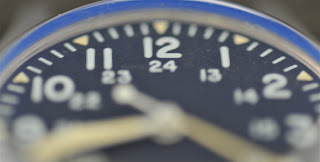