Kerbedanz: diamonds and precious gems, the craziness of paving stones Maximus Royal, diamond rain on the world's largest Tourbillon.
The first masterpiece of a micro-series of 14 unique timepieces, the Maximus Royal Tourbillon launched in Geneva seems to have been sculpted from a diamond block: 18.47 carats, 453 baguette-cut diamonds, invisibly setting. Soon, a gemstone festival! 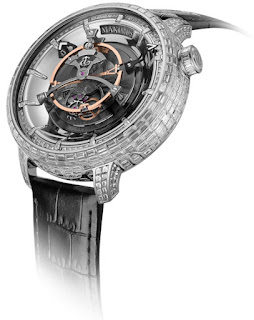 With its 27 mm diameter cage, the Tourbillon of all superlatives is the largest in the world on a wristwatch. It is now available in a paved version, entirely diamond-covered. This Kerbedanz timepiece is the supreme embodiment of a Swiss watch brand of excellence whose destiny lies at the crossroads of the quintessential complication arts of traditional Swiss watchmaking, namely the absolute mastery of pure chronometry, and the age-old savoir-faire of a long jewellery family tradition.
"One of Fourteen", the multifaceted dimension of uniqueness.
Exclusively on order, the 14 Maximus Royal Tourbillons to be made by Kerbedanz will each belong to a range of different coloured shininesses. Each piece will have a unique hue, subtle dosages of colours but, always, this common engraved inscription: "One of Fourteen".
Because, beyond the immaculate beauty of the timepiece all adorned with diamonds, there are all kinds of precious stones that can be set on a watch case. In the world of emerald, jade, ruby or aventurine, the most irresistible shades as well as all intensities of nuances are possible: chiaroscuro, gradations, concentrates, underlined marks, faceted cuts, reliefs and contrasts, cultivated symmetries, claimed and assumed asymmetries. Gem-setting is an art, it never stops surprising us.
Fusion of two myths, the arena and the watchmaking complication.
In the 6th century BC, between Palatine and Aventine, the Etruscan king Tarquin the Elder built what is still today the largest vestige of all Roman antiquity in the field of chariot and horse racing. The Maxime Circus-Maximus in Latin and Italian. Long afterward, one of the greatest watchmakers of all time, the Neuchâtel native Abraham-Louis Bréguet (1747-1823), invented a mechanism that he called "Tourbillon". The aim was to place the regulating part of the watch inside a cage rotating on itself in order to compensate for the negative influences of gravity on the accuracy of a timepiece.


In 2017, the Kerbedanz brand, which is attracting the attention of more and more collectors and purists, unveiled Maximus, the wristwatch with the world's largest tour- billon with a 27 mm diameter cage, almost twice the model known until then to hold this size record. Above all, thanks to its mastery of the fundamentals of precision watchmaking, Kerbedanz produces an extremely precise watch, endowed with two patents, one of which concerns its original winding system. It is a toothed wheel to be operated on the back of the part. 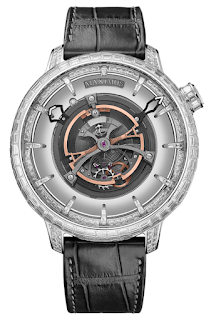 Maximus, esthetics and nobility of materials.
The beauty combined by KERBEDANZ in its world premiere Maximus, is full of aesthetic richness and watchmaking harmony made of ultimate care, of polished finishings, such as these hand made polished bevels, these stretching of the sides of the parts, these ring gears, these screws pro- posed in a polimirror finish. As for the versions of this exceptional watch, offered with the most advanced customizations, there is the nobility of the materials: white gold, yellow, pink, platinum, titanium. In complement to the all-black treatments with their seductive depths, the infinite range of colors specific to precious stones and their combinations is now available. The Maximus exemplifies, in the world of significant and unavoidable achievements, the bold pursuit of excellence in all its forms.
Maximus Royal Flying Tourbillon Micro-series 14 copies / 2 patents pending.
Didactic: the Kerbedanz Maximus Flying Tourbillon, with its XXL tourbillon size, makes it possible to better observe and understand the subtleties of this fascinating mechanism, but it also demonstrates the extent of its watchmaking skills: de- sign and manufacture of a specific spiral, a racquetry with fine adjustment screws and a pendulum. Here, the cage rotates every six minutes and not in 60 seconds, as is the case most of the time.
MOVEMENT
Caliber KRB-08, with giant central flying tourbillon, in-line pallets, in a 27-millimeter cage making one rotation every six minutes. 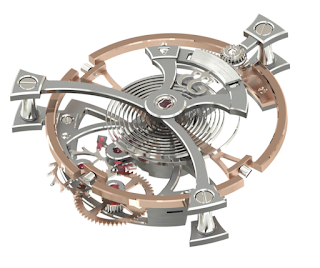 Mechanical, hand-wound movement, conceived, manufactured and deco- rated by KERBEDANZ. Balance wheel and hairspring specifically developed or this caliber. 34 jewels, 18,000 vibrations per hour (2.5 Hz),
Four barrel springs in parallel driving a central wheel mounted on ball-bearings producing the torque to supply a tourbillon of such size. 54 hours of power reserve with indicator.
A total of 415 components, tourbillon cage entirely of titanium, made of 73 components, weighing 1.35 grams. Movement diameter: 40 millimeters. Movement height without the cage, 8.35 millimeters; with the cage 13.2 millimeters.
The tourbillon allows the regulating parts of the watch to rotate, thus achieving different positions to compensate for errors due to gravitational forces, to the non-concentric development of the balance spring, and to the point where it is attached to the collet.
Due to its spectacular size, the tourbillon can be observed and its functioning better understood.
The competencies required are the following: design and manufacturing of a balance spring, a rack with a screw for fine adjustment, and a balance wheel.
Haute horlogerie decoration with polished chamfering, drawing of the watch flanks, circular-grained wheels, mirror polished screws.
FUNCTIONS
Hours, minutes, 6-minutes tourbillon, power reserve indicator
CASE
18-karat white gold, 51 millimeters in diameter. Toutes formes de sertissage, diamants et pierres précieuses. Designed and manufactured by Kerbedanz. Sapphire crystal and exhibition case back with antireflective treatment. Water-resistant to 3 atmospheres (30 meters), time-setting crown at 2 o’clock and centralized winding using case back.
DIAL
Massive gold. Exclusively designed, manufactured, hand- decorated by Kerbedanz.
BAND
Alligator mississippiensis skin or rubber, 18-karat gold buckle personalized by KERBEDANZ.
For more information:
Kerbedanz
Posted by Ivan at 19:23