My Seadweller is back

I finally got my SeaDweller back today. It has gone for a spa treatment at the Rolex Service Center. It has been there for about 2 weeks. As usual I am happy with the work done by Rolex. Why did I send it in? Well, I noticed that there were marks on the hands of the watch and decided to send it to Rolex to see what they could do with it. They told me that the marks were 'corrosion' due water damage. They suspect that the former owner may have not screwed the crown down fully when he went for a swim.

If you look closely, you will notice the water marks on the minute hand. There is also water damage on the hour hand, just at the tip of the triangle. 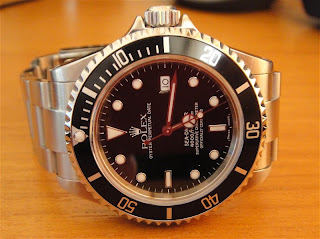 Anyway, they told me that they cannot clean the marks and have to replace the hands. So I decided that since it was going in to have the hands changed, it might as well go in for a service. This after the watch was serviced 2 years ago. Emmmm....

Anyway, they took the watch in and after a while they came out and told me that the reason for the water damage was due to the fact that the 'fart' valve (OK, Helium Release Valve) was not working properly. They suggest that I change that as well. OK, change it as well. They also told me that there were some water damage on the dial but as luck would have it, the damage was at the edges under the rehaut. So they will clean the damage, opposed to changing the dial. They say that the damage was very little.

I also told them that I do not want them to polish the case as it was polished 2 years ago and there were no real scratches or damage on the case.

After 2 weeks and here is the watch. I even sent it to my friendly neighbourhood watch guy and had the watch timed. We checked the watch and it is running +2 seconds a day. He say it is impressive for a 7/8 year old watch until I told him it just came out of RSC. 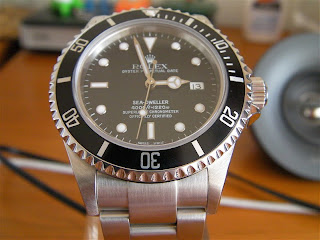 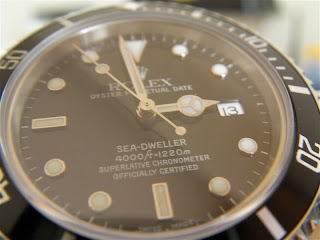 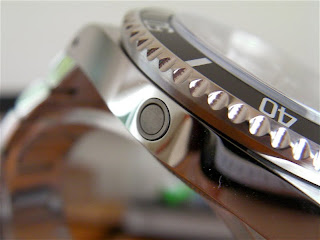 The unpolished case, note the small scratches and pitting. 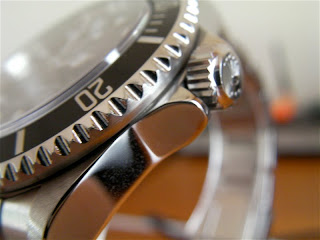 They (Rolex) did give the bracelet a slight brush up. 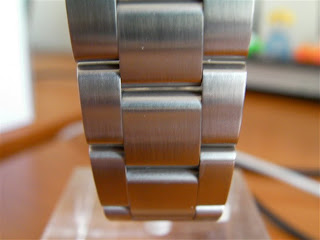 Well I have to say that I have always had good experience (touch wood) with RSC having sampled their service level and quality in 2 countries. Sadly, unlike the RSC in Japan and US (that I have seen), the RSC in Taiwan does not issue the 1 year service guarantee card. Here they work on the fact that they have the record of the watch and when it was last serviced and the receipt that was issued.

Now I am waiting for my Tudor Submariner 94110 to come out of the service center. This one will have a lot of work done on it. So far the crystal, bezel insert and hands have been replaced, early this year. Now it will have the stem tube, crown and rotor changed. They are still looking for the dial. And it is its first service in 20 years. And the case will not be polished.