I am finally happy with the condition of the Breitling Aerospace that I purchased. It has been a long adventure. The Breitling Aerospace is one of the watches that I really wanted but never got. Every time I wanted to get one, the price of the watch has gone up. Getting one pre-loved is just as difficult as it hardly comes up, more so, the exact model that I want, reference F65362 with the dark gray dial.
So what is this preoccupation that I have with the watch? Well it is the only Breitling that I like. I don’t know why but the rest of the watches in the Breitling collection do not sing to me. Only the Aerospace.
The second reason is because one of my ex-bosses wore one. I had just graduated as an aircraft maintenance engineer and was assigned to work with him. My interest in watches was just budding and was very impressionable.
Here was this guy that had one on his wrist and he never took it off. I mean he never took it off. The watch was soaked when we were working out in the rain, it was sun drenched when we had to work on the aircraft during midday. Late at night when the temperature dropped, the watch was on his wrist.
It was on his wrist during the many engine ground run that we did. Imagine the amount of vibration the watch was subjected to. It was on his wrist when he was working on the engine, watch soaked with engine oil, fuel and sometime even hydraulic fluid. And we know that hydraulic fluid and titanium do not go together.
It was on his wrist at the end of the workday when he washed his hands, watch covered in industrial strength soap. The watch had many scratches, bumps, dents and nicks, but it kept running. Here was another watch that could take it all. I know about the other brand with its reputation of being able to take a beating, but this one, right in front of my eyes.
Of course it did not help when my friends who studied with me but became pilots, came up and showed their Breitling Aerospace issued by their pilot association (only 100 were made). I wanted one. 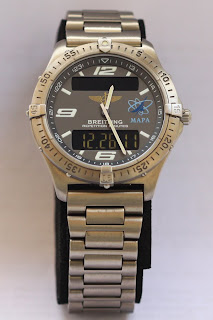 Photograph: paparadzi
To compound the problem further, you have photographs like the ones below showing people in the industry I love wearing the same watch. 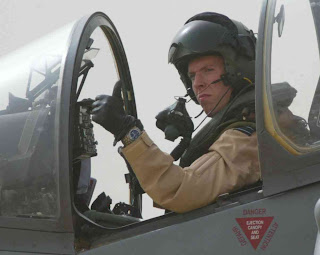 Photograph: borrowed from the Internet
It has even been into space. On the wrist of the Claudie Haignere. 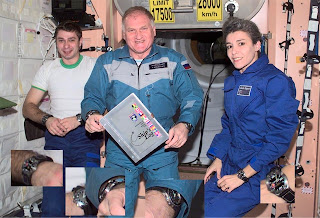 Photograph: borrowed from the Internet
And when I was on holiday in UK, on the wrist of a helicopter pilot…. 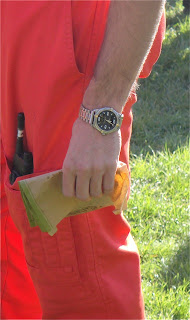 So when one came up recently on one of the forums I frequent, I decided that I must get it. Best of all, the owner was a former air force pilot who had retired but still flew commercially. Aviation links still strong. Purchased and paid for. Waited for the watch but fate was not with me. It took a long time to get the watch to me. Talk about so near yet so far, it took about 10 days to get the watch 1,000 km to me. Sigh…. 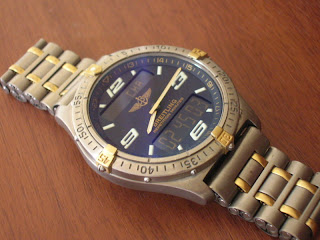 Photograph: seller
The first problem I faced when getting the watch was the module was not working. Not the entire module, just the sound module. There was no sound when the alarm went off, nor was there sound when you selected the minute repeater. Luckily for me, the seller was a true gentleman. We had a chat and we divided the repair cost. The watch went off to the local Breitling Service center. I asked the local center to also service the watch. They said ok.
The defective module. This is the COSC B65 module. 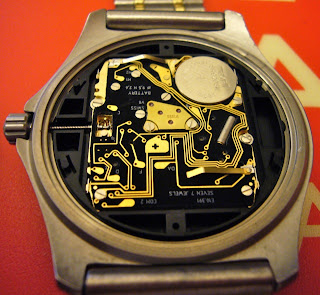 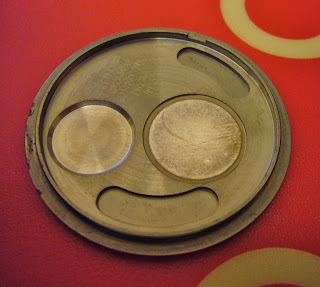 Closer view of the module. 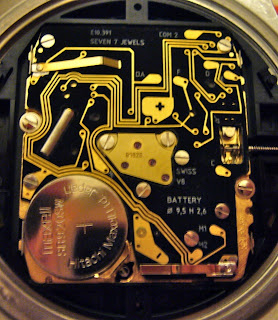 The old case back. 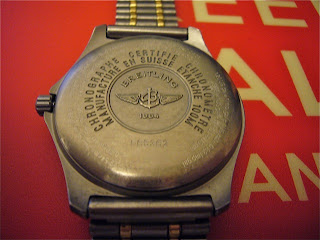 The new case back. 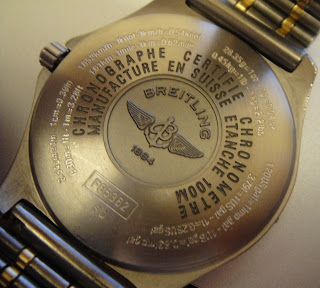 After one month, I got my watch back. Had a look at the watch and everything was working. I asked if they did service the watch and they said yes. It was at that time that I decided to purchase extra links for the bracelet. The watch comes with an expandable buckle, but I wanted the bracelet to be a bit longer. So 2 links were ordered. It will take a month.
Got home and was using the watch when I noticed that the bezel was not rotating smoothly. It was rotating but not very smooth. So I decided to remove the bezel. Well, judging from the photographs below, enough said that the service was not done. I decided to ask the service center when I visit them to pick up the links if they did service the watch. 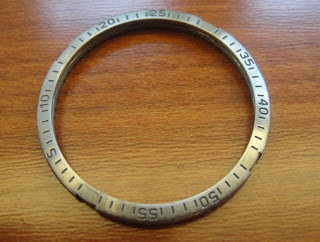 Note all the DNA and gunk. 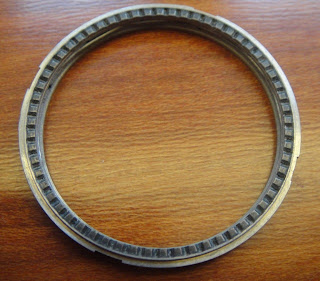 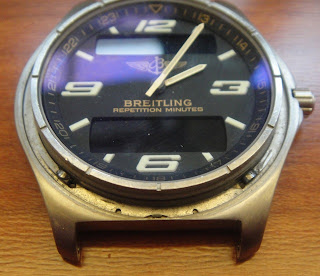 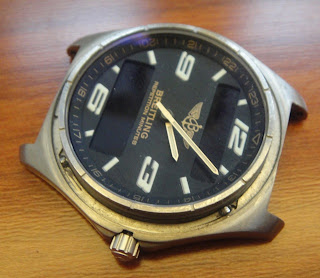 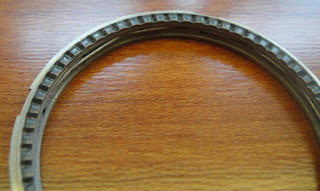 I decided to change the bracelet to leather strap as I did not want to stretch the expansion link every time I had to put on or off the watch. On removing the strap I noticed that one of the pins on the folding part of the buckle was missing. On closer inspection, I found that the part had basically rusted away. The pin, which was basically a hollow pin, has rusted and only half a pin was left.
The hollow pins. 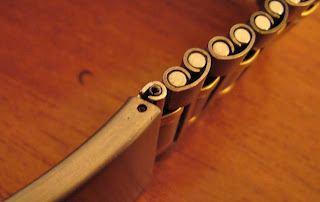 Anyway after a month wait, Breitling called and the links have arrived. I went and the service guy was there. I asked and he said that he had serviced the watch but will do it again. I told him to fix the links first while I decided if I wanted him to service the watch. After a half hour wait, the service guy told me he could not install the links as there were parts missing. Huh? New links yet parts missing? I was told that it would take another month to get the new links.
Ok, I told the guy I would send the watch in when the links arrived. Sadly the condition of the bezel got from bad to worse, more so during cold days.
After a month, got the call and went over. Showed the guy the bezel issue and the pins issue. He had a look and told me that the bezel was not ‘round’. So at times the bezel would ‘stick’ against the side of the watchcase. He suggested that I change the bezel. I said ok, but what about the pins? Also, will he service the watch? He said he would do everything. How long? One month. Well at least Breitling was consistent.
Finally the month passed and I got a call. Went over, not really expecting a lot. Was very surprised when I got the watch. The new links installed, the buckle pins replaced with new solid pins (the old hollow pins no longer used), new bezel, new gold risers at the 12, 3, 6 and 9 position, new bezel screws, stains on the inside of the crystal removed, case brushed and the watch looked like new.
The new solid pins. 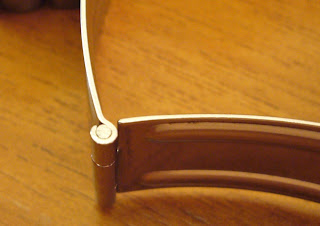 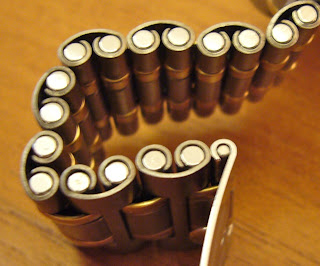 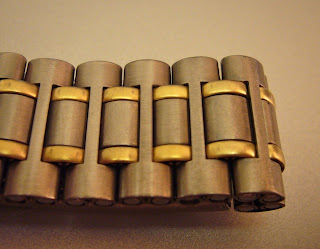 Total cost? Not as bad as I thought as I bought the watch cheap. The cost of replacing the module and case back (as the module is thicker) was shared between the seller and me. The bezel and links was not very expensive. Surprising that total cost is still cheaper as compared to the listed price of the watch pre-loved. But the fact that the watch looked like new was worth it all. Finally the Breitling Aerospace is all go to become my daily use watch. 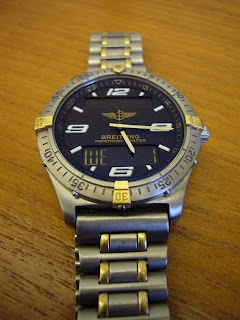