Panerai Time and Space - A Tribute to Galileo Galilei Exhibition

Panerai is currently having an exhibition called 'Time and Space - A Tribute to Galileo Galilei Exhibition' in Shanghai, China. The exhibition will be open to the public from 20th to 31st May. Extracted from Panerai:
'Officine Panerai has chosen Shanghai for the only international staging of “Time and Space: a Tribute to Galileo Galilei”, the exhibition in which Officine Panerai puts a range of the most important watches and instruments from its own historical and contemporary collections on display. The show, taking place at the Shanghai Sculpture Space and open to the public from 20th to 31st May 2011, culminates with the exhibition of the “astronomical” triptych made by Officine Panerai as a tribute to Galileo Galilei, on the occasion of the 400th anniversary of his first celestial observations.
Having premiered in Florence in September 2010, the exhibition comes to Shanghai in a version enriched by the Officine Panerai 2011 collections, and explores three stages. The first is that of history, which uses select pieces from the Panerai Museum to trace the development and establishment of the Panerai brand, from its roots as a Florentine workshop to preferred supplier of precision instruments to the Italian Navy.
The second stage covers the brand’s international fame following its acquisition by the Richemont group in 1997: a large room displays the most symbolic timepieces of the 14 years in which Officine Panerai renewed the former glory of its iconic watches, the Luminors and Radiomirs, quickly developing a complete range of movements designed and produced in-house in its Neuchâtel factory. This section also features a selection of watches from the latest Officine Panerai collection, including models with the new hand-wound mechanical P.3000 calibre and the Luminor Submersible 1950 3 Days Automatic Bronzo – 47 mm.
The third stage is a tribute to Galileo Galilei, the genius to whom Officine Panerai, celebrating its shared Tuscan origins and love for science and innovation, has dedicated an “astronomical” triptych, formed from three exceptionally complicated models: L’Astronomo (Luminor 1950 Equation of Time Tourbillon Titanio – 50 mm), Lo Scienziato (Radiomir Tourbillon GMT Ceramica – 48 mm) and the planetarium clock Panerai Jupiterium.' 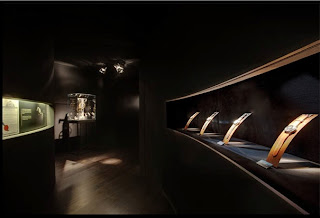 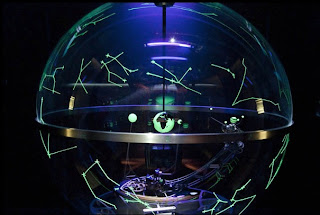 Photographs: Panerai
Posted by Ivan at 15:58