Rolex has a new CEO.
Courtesy of Reuters:


ZURICH, May 4 (Reuters) - Rolex, the world's biggest luxury watch brand, appointed Riccardo Marini as its new chief executive, replacing Bruno Meier who held the job for only two years in a surprise management change.
Marini was previously responsible for Rolex Italia, said the privately-held company, whose models compete with Swatch Group's Omega brand and Richemont's Cartier.
"The board has decided to update corporate structures in order to continue the dynamic development of the brand, prepare for the future and cope with a pickup in markets, especially emerging markets," spokeswoman Virginie Chevailler said on Wednesday.
Meier was appointed CEO of Rolex in 2008, succeeding Patrick Heiniger, who held the position for 16 years.
Chevailler did not give any details as to why Meier was leaving the company.
Vontobel analyst Rene Weber said he was surprised by the move. "The reasons are unclear and the new CEO is not known to us," he said, adding he estimated Rolex sales amounted to 4.4 billion Swiss francs ($5.1 billion) in 2010.
Demand for Swiss watches rebounded strongly from a slump during the economic crisis, thanks to growing appetite for luxurious timepieces in emerging markets, particularly Hong Kong and China.
Rolex founder Hans Wilsdorf left the brand to a foundation named after him that still controls Rolex and never discloses any financial details.
The new CEO, Riccardo Marini 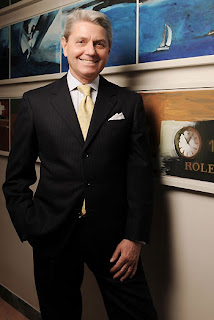 Photograph: Rolex
Posted by Ivan at 10:07