BAPE has released for its Autumn Winter 2010 watch range, the Bapex Clear Shark watch (OK, I know it is already 2011). There are 3 colors to choose from. The watch, which looks like a popular diver watch is available in two-tone, camouflage green on half the dial and bezel with the other half in gray, blue or red. 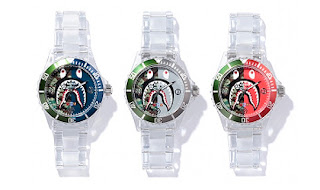 The watch is made of clear and translucent plastic, as is the band. The clasp is made of metal though. The crown is signed with the BAPE logo. The watch measures 40 mm in diameter and has a lug width of 18 mm. The BAPE shark graphic adorns the watch dial. 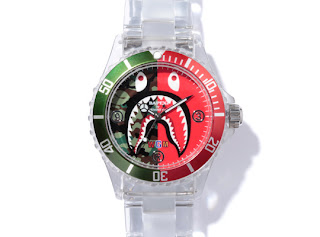 Photograph: BAPE
I believe a quartz movement powers the watch. I also understand that the gray version is limited to North Asia and Singapore. Expect to pay around $175 USD for the watch. The watches are available in BAPE shops worldwide.
Posted by Ivan at 18:42